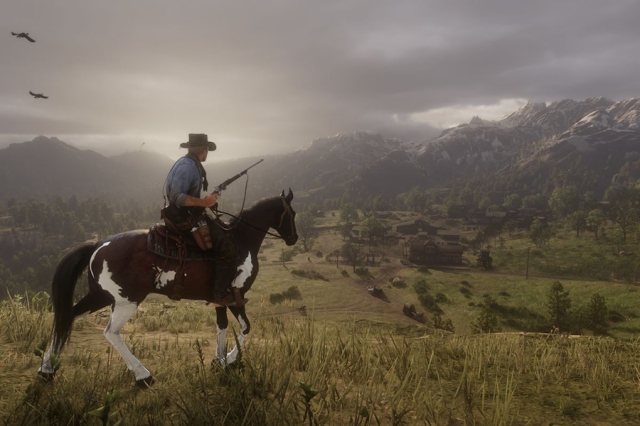 Can a computer game belong to the canon of great Westerns? My reflex response was no. Yet whilst playing Red Dead Redemption 2, which was finally released on PC earlier this month, I keep questioning my initial resistance. The vividness of the game’s incessant violence and inhospitable extremes of the American wilderness equates to the imagery conjured in Cormac McCarthy’s Blood Meridian. Blood Meridian is a true western: an endless cascade of violent hedonism, wastage, and the collective mania that besets a fractured lawless society, not the infantilised, sanitised, idealised big screen depictions of nineteenth century frontierism starring John ‘Wooden’ Wayne. It’s little surprise Westerns are synonymous with such dross, much of the mainstream artistic output of the twentieth century related to the era triumphed Frederick Jackson Turner’s frontier thesis.

Distance, mixed with changing attitudes, tends to encourage re-examination of historical periods romanticised by popular culture. So, in 2019, with the utterly pathetic cancel culture rampant, it makes total sense for Rockstar, the contrarian joker in the mainstream pack, to reproach the snowflakes by turning its sarcasm on them through an increasingly contested historical lens.

However, Red Dead Redemption 2 does offer a deeper examination. The game is set in 1899, at a time when wild west freedoms were being demonised and or curtailed. Attitudes were increasingly favouring a more organised, urbanised, and yes, civilised society. This conflict motivates you, playing as Arthur Morgan, to kill and steal, and to maintain you and your posse’s goal of sustainable subsistence, free from the reach of government interference and urbanisation.

Those who argue violent games cause crime, usually the hypocritical gun lobbyist types, will target Rockstar’s attempts to glamorise outlaw life. If it wasn’t so close to the bone, they’d compare the fictional, and justified, persecution of outlaws as synonymous with the real paranoia held by many modern fringe far right organisations, such as the Michigan militia, who they pander to. Even though I’ve just done it for them, any such comparison has no merit. Context always matters. Today you don’t need a gun, nobody is out to get you (unless you’re an Albanian sex trafficker and you kidnap Liam Neeson’s daughter), most folk live in towns and cities and have jobs that sees them in front of computers. You buy your food from shops, and there’s no need to hold up Starbucks to get a Skinny Caramel Latte darling.

In Blood Meridian the main protagonist is an observatory vessel for the narrator. The Kid and we bear witness to lawlessness and gruesome crimes, which often occur for no reason. Comparing Blood Meridian to Red Dead Redemption 2 in this sense creates a paradox, as the justifications to mis-behave in the game are clearly defined. Missions and random events tend to offer a binary choice, it’s you or the other fella. While similar to Rockstar’s other sandbox epic, GTA V, in construct, Red Dead Redemption 2 is more nuanced, as consistently robbing and committing murder on passers-by and civilians alters a sliding outlaw scale. The redder your rating on the scale is, the more immoral you are, and this rating alters elements of the story and suitably inhibits your ability to do certain things. Alternatively, should you choose a different path, you are rewarded for acts of chivalry and generosity.

So far, with a third of the game complete, my outlaw rating is ‘balanced’, so I’m going to assume my soul has yet to be completely corrupted by violent temptation. I’m yet to turn gun on any women or ‘non-whites’. This probably speaks to my ‘fucking liberal’ views. But lord, I have sinned too. Shooting a horse, albeit accidentally, put me on a bit of a downer. Nonetheless, perfectly executing a stealth kill makes me react like Limmy killing a hundred villagers in a Minecraft deathpit. I also take immense joy in killing a member of the rival O’Driscoll gang, because they have it coming. Riding up behind a stranger on a path, and at point blank range, literally blowing his head clean off with a sawn-off shotgun or lassoing and looting him, then leaving him tied up in the tall grass squealing for help was fun, well, until a witness grassed me up and I had to dispose of them too.

The argument against including Red Dead Redemption 2 in the canon with Blood Meridian is that the former isn’t attempting to be a serious artistic proposition. You can pimp your saddle, give your horse a Mohawk and can attain absurd gun upgrades which break through the authenticity of the game’s physics and world, which, broadly, are rooted in reality. Your mortality, as is that of your horse, is very fragile. You have to maintain Arthur’s health and that of your horse by feeding it, you need to rest periodically and wear the correct attire for each environment. If you’re out-manned and or outgunned, you’ll often perish, unless you can flee. Falls from a height are often fatal, and apex predators bite back with a vengeance. So far I’ve succumbed to all.

Red Dead Redemption 2 is a technical marvel, and I’d argue argue its technical accomplishment makes it an artistic one. Visually this game has the most impressive level of detail I’ve experienced in a game. Sunsets are events, the mountains are intimidatingly steep and rugged, rocks crumble under your feet, the snow crunches under your feet and drifts in the wind, the swampland’s mud is as gnarly and sticky as the air is thick, the sounds of nature and wildlife, as well as an unobtrusive score, enhance the bucolic aesthetic, where nature’s perpetual threat is overawed by its beguiling beauty.

As I roam free in Red Dead Redemption 2, to kill another passer-by or hunt a legendary animal, I’m reminded of the fiddler at the end of Blood Meridian, who, metaphorically, represents humanity’s relentless capacity for savageness. Through different mediums, these two Westerns do what the genre always should – implicitly state that nature does not make savages of men, it liberates our nature.

1 Response to Yes, Red Dead Redemption 2 is a great Western