Syria – how can you decide on a strategy when the question is unclear?

It was no surprise that a vote in the House of Commons for the UK to join the military action against Islamic State in Syria was passed. The more pertinent questions about military intervention have followed; whether this is how taxpayer money should be spent during austerity? Will it work? What’s the long term plan? Why wait until now? The UK’s contribution, as it stands, will be quite limited and airstrikes had already begun. Not that this affects the morality of the issue, if you’re against it, you’re against it. If you believe in it, you’ll believe in the value of even the smallest contribution.

But it does make me wonder why in binary votes of its kind, which limit the scope for debate, that there aren’t more abstentions, aka ‘don’t knows’? We should also consider whether it is right that there are external pressures placed on MPs to take a side in such matters. The general public aren’t subject to those same pressures yet the desire to take a side remains ingrained. It would be fair if this was us consciously holding ourselves to the same standards as we hold MPs, but it’s not. Elected members are automatically tarred with the accusation of being preoccupied by self-interest, so an abstention can be construed, or spun, as a cop out, or even worse as indifference. MPs have to be wary of the majority opinion of their constituents as well as the position held by their party’s leadership. For them it’s often not as simple as just considering the evidence.

Not helping is the myopia of party political squabbling and media commentators with a clear bias or agenda using such an issue for political point scoring. This shite really is the absolute worst, and stupid too when we consider this: the SNP were criticised for all of their members agreeing with the leadership’s position not to join the bombing campaign, while the Labour leadership were pilloried because several high ranking party members disagreed with the shadow cabinet’s position, yet there were seven Tories who voted No and seven who abstained.

Regardless, I find it staggering that, out of well over six hundred MPs, only twelve abstained. Deciding how to intervene in a civil war can be complex. This is the case in Syria, there are so many factions involved with their own interests and goals, with countries backing different factions for the same reasons, either openly or clandestinely. Some would argue that it’s easier to decide who should be attacked, but will dropping bombs on targets within IS controlled regions diminish them significantly? And if it does, who’ll take their territory? Is it a step, within a strategy, towards achieving stability in the country? Is that even the motivation for joining in? 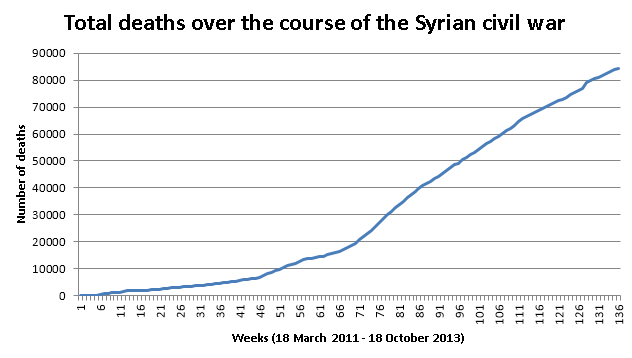 One of Iraq’s woeful legacies is that military operations in foreign conflicts are framed with overwhelming cynicism and aren’t judged on their own merits. With Syria, the chaos there is deemed to be a result of past interventions in neighbouring states, and that these have only served to harden the resolve of the Taliban and other Islamic extermists into forming a more militant theocracy in Islamic State. So, given that belief, it’s hard not to see the UK’s (or any other state’s) decision to join the fight against them in Syria, and only now with airstrikes, as a cowed form of hypocrisy, as deferring action against the brutality of the Assad regime has allowed IS to make territorial gains and gain support among those who Assad has oppressed. Most western governments were largely unconcerned with the Syrian civil war and its outcome unless it was perceived to affect them directly, an opinion which has changed due to the recent attacks in Paris.

If you were to be sensible about it, no two situations are the same and every situation would be judged in isolation. But the UK’s part in the Iraq invasion is an open sore, as support for it in the commons was enriched by lies, and people, rightly, still feel cheated. In retrospect it now looks to be a smash and grab, a piece of blatant opportunism concocted by arrogant ideologues in haste, facilitated by the heightened hysteria after the 9/11 attacks, one that’s left an entire region in tatters and left the west no safer from extremism.

But what’s done is done, and extremism isn’t going away. Indeed most victims of Islamic extremism are Muslims, Muslims who still believe, but whose beliefs aren’t right, or pure enough. If they’re subject to such scorn and pathological hatred by the caliphate, then the other infidels, whether it be non-believers, secularists and hedonists, aren’t likely to be treated any better.

Set against the backdrop of this wider issue all the vehement arguments for and against military action in Syria seem, to me, to be woefully inadequate. I suspect there is no right choice, just a series of undesirable choices, each with their own dire and unforeseen consequences. That’s why I’d abstain on a proposal which mandates an airstrikes only campaign, as outright supporting or opposing it fails to formulate an answer to any of these essential questions: will it work? What’s the long term plan? What’s the most effective means of defeating Islamic State? Which of the opposition factions in Syria should be supported or opposed?

Faced with genuine uncertainty, and with such a limiting choice of action, it makes sense to abstain or admit that you don’t know and ask these questions, than to abdicate responsibility by making a wholly uninformed one. Make enough of those and we end up with what’s going on right now in Syria.