Is Alex Salmond’s insatiable need for attention the biggest impediment to the Yes campaign’s success?

First off, I want to state that I’ll be voting yes next September. I’ll get into the reasons why as we get closer to the vote.

Good, so that’s out of the way. You’re entitled to glean from this that while I don’t need to like Alex Salmond to vote yes, it’s unlikely that I dislike him. I have no interest in him or his life beyond his role as a public servant. When it comes to politics, policies and manifestos should count, but invariably for so many they don’t count enough. It’s been like this for decades, with slease and scandals being used to distract the sheep like electorate. It’s even worse nowadays with so many forms of media fighting for your attention, covering whatever and invariably whomever it takes to gain it, often with the use of disingenuous sensationalism and editorial slanting.

And therein lies one of the problems with the yes campaign: its face and leader is consciously ubiquitous. With today’s media saturation the difference between a negative and positive perception is often subject to pre-filtered opinions before the facts become relevant. This becomes exacerbated when you take it upon yourself to slant things from vulnerable positions, which, sadly, Alex Salmond has.

Case in point: the occasion of the Men’s singles final at Wimbledon 2013. No, really, bear with me.

A consequence of the advent of Facebook and Twitter is the subtle shift it has caused in the style of television reporting, and the opportunities that climate has created. We get more crowd and celebrity close-up shots than ever now, particularly at sporting events.

On the surface it might seem trivial, but Salmond’s pre-planned performance at the Wimbledon final, moments after Andy Murray secured victory, and the attention it intended to receive, was more likely to shame than proclaim the campaign he is self appointed to front.

The whole flag waving episode projects the image that he feels he needs to try this hard for you to notice him, and to be in the places where you will. With the vote a year away how you’re leaning is irrelevant at this juncture. Salmond just needs you to know that he exists. Hopefully you’ll see how happy and proud he was to be at Wimbledon watching one of his (our?) own win the thing. His glee, his gloating patriotism was, you suspect, partly designed to convince media companies to seek his opinion. Eventually, hopefully, you’ll be persuaded to listen to him talk about it – crucially not only Murray’s victory but his reaction to it – and at some point in time he’ll hint with some of his erudite panache that Andy Murray’s victory is somehow indicative of the benefits of voting yes. On this point he was rightfully challenged by a few who cottoned on to the possibility of this being one of the things his post-match routine was trying to achieve, and of course Salmond dismissed it. Small potatoes perhaps, but the fact that he was given the opportunity, at all, to dismiss it meant that his objective of getting the media to consider the possibility of Murray’s victory and the yes campaign being synonymous was achieved. This meant he was seen as a relevant figure on the day. My concern is the hubris gained from creating such intellectually focused opposition might encourage him to do something similar, if and when he gets desperate. Salmond is a slick orator, he seems affable enough, so armed with that, along with the real reasons to vote yes – and there are so many good ones – why demean and corner yourself and the yes campaign with frivolous PR set pieces?

It certainly wasn’t for the benefit of people like me, and hopefully you reading this, who will ignore any showiness when actually thinking about the connotations and permutations of what voting yes or no will mean, for everyone. But you can bet that Alex and his advisors will know there’ll be plenty out there with votes who won’t bother to take the time, perhaps even to vote at all, and that was his target audience for this sort of shite. 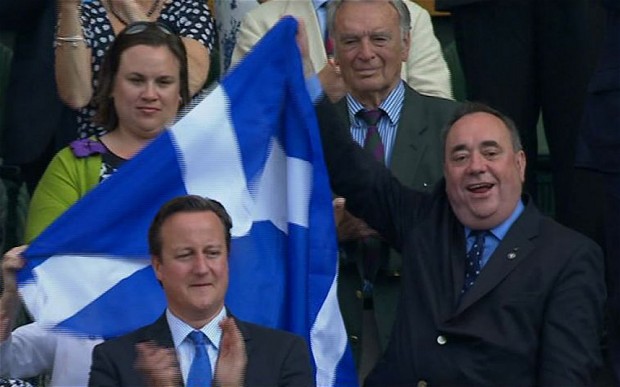 It was galling watching the First minister of Scotland willingly toss himself in alongside the many luminaries of light entertainment, and yes, that idiot Prime Minister. All of them were there for the same reason he was, their message painfully apparent: please look at me, as often as you can, otherwise I am nothing. Nothing exemplifies this better than that horrible fat bastard James Corden, the agonisingly unfunny token pseudo-celeb who exists for idiots to laugh at to make them feel better about themselves. Or even better, how about Gerard Butler and Bradley Cooper? We were treated to multiple close-ups during the match of them sitting together wearing matching suits (almost), like Armani clad twin brothers who were over dressed for the occasion by their overbearing and controlling stylist(s).

Getting involved in that arena is politically perilous at the best of times, but with the vote a year away it’s the sort of thing that can close off the minds of the politically disengaged. Is flagrantly flaunting nationalism and borderline jingoism more likely to encourage people to vote against you out of spite than it is to foment a nationalistic sense of duty to vote for Scotland’s benefit? The disengaged are just as likely to look at his behaviour with wide eyed wondrous contempt as share its sentiment. When the time to vote arrives – should they even elect to – what’s the first thing they’ll remember him doing? Is making an impression, any impression, better than not making one at all? First impressions are hard to shake, if someone sees you acting like a tosser, giving it large, shamelessly piggy backing on someone else’s success just to possibly attain another chance to whore yourself and your message out, that perception is likely to maintain a concrete resonance until a cataclysmic shift changes it. Say, like Jimmy Saville recently, or the opposite. Is there one? I can’t think of any examples of a positive shift right now. I suppose there was a detractor of Mussolini’s out there who felt a tinge of sympathy for him after he was hanged.

Andy Murray’s story deserved better than to be used for petty political capital. His story is that of two brothers brought up in a small town North of Stirling, by a single parent, with one of them going on to become one of the world’s best tennis players. This isn’t a by-product of being in Scotland, its customs or its mores, never mind its politics, as many of the world’s best players found a similar route to success in first world countries other than Scotland. That it happened in Scotland was completely random and insignificant to the achievement itself. It was just hard work, dedication and sacrifice by the many involved to make it happen. Salmond had no right to piggy back on that just to convey his own insecurities about the yes campaign and the perceived apathy of the majority towards change of any kind. Underneath it all was the arrogance, in reality the delusional notion, that unfurling and waving a flag would instantly be synonymous with you thinking about, or encouraging you think about the yes campaign. I’ll hazard a guess and say that the majority of Scottish citizens were watching to see if Andy would win. They couldn’t care less that Salmond was there or what he was doing.

There is a cliché, that less is more. Salmond doesn’t need more coverage of the message, he needs the right coverage. Marshall McLuhan rightly prophesised that at some point in the future the medium would become the message. It’s never truer now than with the yes campaign and how it’s currently being run. Sadly, the onus is on the yes campaign to convince people to change the status quo, rather than the burden being on the no campaign to retain it – case in point, there really isn’t a no campaign. What already exists is proven, reliable, even if we’re not entirely satisfied with it or truly understand the alternative. Salmond knows this, and yet he decided to enter the realm of the desperate and fraudulent, where he and the yes campaign stand no chance of being taken seriously.