The NFL – a safe space for Trumpism? 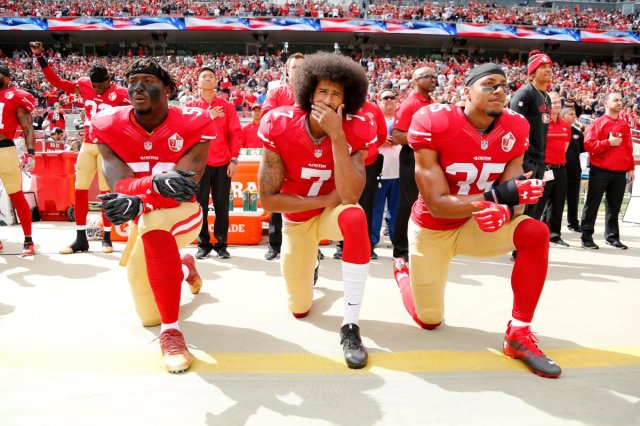 In a moment of serendipity, I went straight from witnessing the unsettling and remarkable, Trump supporters occupying and attacking Congress, perturbed by said scenes and the pedestrian hyperbole of the news, I sought out some real football, only to accidentally happen upon an NFL game, right as the coverage panned over a supposedly ‘socially distanced’ crowd that had clustered together. Here a grim juxtaposition revealed itself, this NFL crowd shared many visual traits synonymous with Trump’s revolutionary loons, goons and cartoons; mostly male, obese, white, sporting trucker hats, shooting vests, some had bad dental hygiene, others held signs adorned with slogans that were trite, incomprehensible or childish, all the while alternating between screaming obscenities and gurning. Sadly, I didn’t observe a Joe Exotic mullet. In life, not even clichés are perfect.

At first this comparison struck me as too convenient and generalised. Is there a significant demographic overlap between those who follow the most corporatized, cynical, exploitative professional sporting league and the gullible, delusional followers of the west’s most narcissistic, puerile, moronic (former) leader? Surely not?

It’s bad faith to take a firm position based on an initial impression (no matter how persuasive it may seem), and then purposely seek confirmatory evidence, rather than letting the evidence sway your opinion. For clarity, there’s no clear correlation between being a fan of an NFL team (or the NFL at large) and voting for Trump.

And using examples from the internet, where anything goes and every fringe has a voice, puts the validity of my assertion on dangerously thin ice. It’s also extremely lazy. But, I’m here to tell you, having selflessly dived down the rabbit hole so you don’t have to, there’s a preponderance of evidence that there’s a sub-culture of NFL fandom which shares many of the sociological characteristics of your average mouth foaming Trump supporter; bloated, arrogant, ignorant, jingoistic, selfish, shallow and belligerently myopic.

First a confession – my extreme distaste for the NFL’s contemporary product and exploitative practises leaves me feeling like a turncoat. Until my mid-teenage years, I watched it, albeit casually, as only one game a week was shown in the UK back in the mid-nineties. I found the NFL highlights show called Blitz, which used to be on Channel 4 on a Saturday morning, usually after Gazzetta Football Italia, if memory serves, with its magazine style editorials, to be more compelling than the fractured drudgery of the live game’s three hour plus duration. Blitz captivated me simply by virtue of its snazzy intro of clever hand drawn animations. The satisfying ingenuity of this creative labour was lovingly extended to reference a mixture of each team’s naming scheme, colours and geography, to signify each team’s involvement in the impending recap of a game from the previous Sunday. Better yet, predating the internet, a magazine show was your lot. You weren’t exposed to any of the grotesque excess that now accompanies closely following most sports; internet forums, fucking Twitter, websites curated by armchair experts analysing junk theories and rumours for content, podcasts, and twenty-four hour sports news full of full-of-themselves talking heads, their bloviating punctuated by hot takes, all of it tinged with and feeding an impatient sense of entitlement, a cultural malaise that’s ruining more than just the sanctity and sanity of sport.

Another confession: the thirty second NFL fan collages Blitz would use for inconsequential levity in their features were a guilty pleasure. The elaborate face paint on adults amused, as did the DIY endeavour of the Oakland Raiders ‘Black Hole’ mob, their leather garb excessively festooned with elaborate patterns of studs and spikes that wouldn’t look out of place on Rob Halford circa 1979. By comparison the fans of other teams were far more reserved, usually settling for generic fancy dress that utilised more spandex than you’d see at an Erasure concert. Speaking of Spandex, in a sweet bit of irony, given its proliferation of sport’s coverage, my interest in the NFL, as well as WWF, or WWE as it is known now, started to wane with the inception of the internet and rapid expansion of satellite television. In the WWE’s case, it’s preposterous and repetitive theatrics, hackneyed rivalries and wooden acting, that made John Wayne or any adult performer look Olivier-esque, may have also been a factor.

Maturity and refinement of taste certainly aren’t givens, but it vexed and perplexed me that the NFL is so popular. However, the rise of Trumpism has presented a cogent explanation.

The NFL has always been one of American culture’s main means of escapism, occupying the place reserved for association football in most other countries. The difference here, in the age of ‘fake news’ Trumpism, is for the NFL to remain at the pinnacle of the ratings in the short term hinges on its ability to appeal to the warped conservatism of Trump supporters, who make up roughly half the population lest we forget. It’s unashamedly posited itself as one of the last safe spaces in the mainstream where tribalism and overt displays of patriotism are virtues (crucial elements of the Trumpist cult), and appeases its predominantly white male audience in other ways. There’s no woke politicism besieging you to ‘fucking wake up and bend the knee’ or LGBT types piously berating you to conform and use the right pronouns. For a start, these ‘right on’ groups know they aren’t welcome in this domain.

Not all NFL fans are Trump voters, but at best they’re complacent about how and why the NFL appeals to these nutters. And there’s always unforeseen consequences for that. “Things are gonna slide, slide in all directions” as Lenny once said. Look, I get it, focusing on the negative is a drag and in a microcosm, it’s understandable that a life long allegiance to a team that pre-dates the current political polarisation, would hold far more sway than focusing on the NFL’s current hypocrisies and problems. Clearly, for some, it’s immense fun watching men crashing into each other at dangerous speed, parlay betting, trying to win your fantasy football league and believing what suits you about the quarterback’s mental state or whining to your mates about how your team of choice needs to make changes to win some fucking games, man. 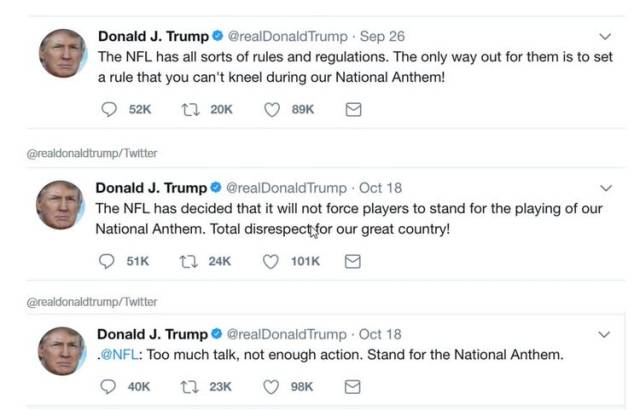 While Colin Kaepernick’s protest and the concussion lawsuit started before Trump’s presidency, their dismissive treatment by the NFL can be viewed as wins for Trump’s vision of an anachronistic American utopia where everyone knows their place. If we’re being kind, Kaepernick’s blacklisting is instructive that the nearly entirely white NFL ownership cabal feared a significant backlash due to your average NFL fan’s aversion to black political activism, or any kind really, impinging on their sanctuary. More likely, emboldened by Trump’s chiding on Twitter (above), they simply agreed to lay down a marker, that a black man and a lowly player needed taking down a peg or two for getting ideas above his station.

The NFL’s cynical handling of social activism has been very effective, keeping it at arm’s length with lip service and token gestures, whether it was letting the players sort out the sideline protests, implementing the Rooney Rule, which to the unqualified eye hasn’t worked, or the Washington Redskins finally changing their astonishingly racist team name, but only due to external pressure from sponsors who’d rather not be associated with that sort of thing in the year 2021. It speaks volumes, that in the main, the Washington fans were dead against changing it.

That most fans don’t care for player health was equally revealing. Take this NFL blogger with an advert infested, cataract creating, hideously retrograde website, who believes Covid-19 isn’t a big deal, or Fauxvid-19, as he calls it. This despite it currently killing more Americans per day than the 11th of September attacks, and at the time of writing, approaching half a million deaths total in the US. Suitably this lackadaisicalness mirrors the NFL’s approach to Coronavirus, where teams were still forced to play despite outbreaks among their playing staff. As for the concussions lawsuit against the NFL, it was swept aside with an out of court settlement, the rules tweaked to discourage head to head collisions, with a concerted effort by everyone with a vested interest in maintaining the status-quo – the league, media and fans – to collectively forget, removing the concern from public debate. And anyway, what’s a billion dollar settlement when revenues exceed fifteen billion a year?

Even better for business, the NFL players union is so under the thumb that the BLM protests barely permeated the NFL’s stance, especially when compared to the power NBA players wielded over that league’s response to events. And no wonder the NFL found it easier to keep the protest confined to specific parameters (sidelined on the sideline during the national anthem), it’s infinitely riskier for the NFL player to radically revolt in a singular manner, especially after Kaepernick’s treatment. Their careers are, on average, considerably shorter than other sports, they’re mostly black men, many from disadvantaged backgrounds, who reach the NFL in the hope of being paid millions of dollars, and even if they manage that they’re only guaranteed to get a portion of their contracts. This after being drafted by professional teams from a college system which doesn’t pay them a dime. Such a systemic exploitation of millionaires by billionaire owners is justified through tradition, and because it occurs in an echelon where its predatory dogma doesn’t seem as egregious as in other spheres.

It’s amusing that a capitalist industry uses egalitarian principles, like a salary cap, to masquerade greed under the guise of sporting integrity and fairness. Meanwhile the fans get gouged on merchandise, tickets and streaming subscriptions to help pay for it all.

This exploitation happens to fans in other sports. So why pick on the NFL? Because it was the first to embrace greed being the ultimate good and offers a depressing glimpse of the future for other sports who are bound to be tempted by the success of its soulless model. In some cases this shameless commercialisation has already spread, the Premier League on Sky sponsored by Toyota, or is it fucking Renault? In a post-Covid EPL, whenever that is, instead of the Bills Mafia breaking tables and obnoxiously loud Trumpers, it’ll be grounds filled with stockbrokers and software developers on six figures with a smattering of Brexiteer gammon who benefitted from it enough to be able to afford the £90 tickets.

In this dystopian present we can take some solace in the NFL’s place as the most popular sport in the US. Trump has been deposed, the televised revolution failed and now one of the last remaining paragons of Trump’s America, the church of the NFL, which, like any good religion, exploits it’s subjects, is the destination his congregation deserves. When sequestered in said confines America doesn’t have to be made great again, because for at least three hours every Sunday it is as it should be.