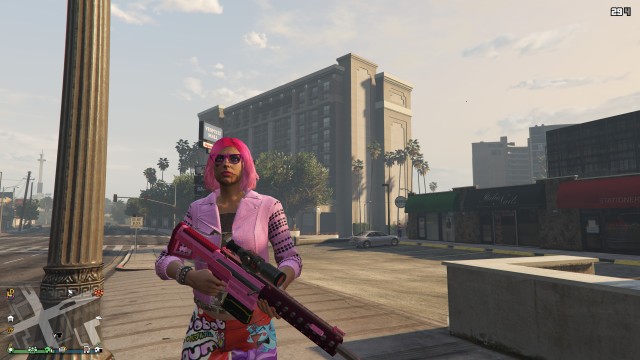 Not to blow my own proverbial, but after the Spanish state’s assault on peaceful democratic process in Catalonia, that despicably gruesome bombing in Mogadishu, Genocide in Myanmar, another inexplicable mass shooting in The States, and the ongoing not just verbal tête-à-tête between Tango Trump and Kim Jong-Whatever, I feel completely normal. There’ll be several causes for this, but there’s little doubt playing copious amounts of GTA V Online is one of them.

Quick digression here – but I simply can’t recall two more preposterous looking heads of state in my lifetime than the aforementioned. Kim Jong looks like he cuts his hair with a toaster, while Trump’s brushed his hair-piece with one. There’s a macabre irony to Kim Jong wrong-un’s obesity and his crappy vanity missiles when many of his subjects are severely malnourished. The twatty self-publicising polemicist already has a radioactive glow of a disproportionately rich chemotherapy patient besieged by maintaining misplaced vanity. His caked in faked scrotum coloured skin – thanks to a suitably similar regimen which a cancer patient must go through, but in Trump’s case melanin injections followed by sunbed sessions – meshes wonderfully with his wispy hair and whitened teeth. You’re an ugly, old, portly cockmonkey, and everyone can see past your bizarre façade. Mind you, he might want to reconsider his sui generis style if he presses the button, because he may not stand out from a crowd afterwards.

If the Rockstar staff invented, rather than just parodied, two figures as ridiculous as Trump and Kim Jong-un in one of their titles it could be mocked for laziness. Thankfully in GTA V Online they’ve created a concept that encourages conflict. It cajoles your natural selection instinct to dominate, through subjugation, either as an individual or in a faction into action. Widely variable behaviour; self-interested, considerate, vengeful, peaceful, tepid and psychotic, can often displayed by the same player, and is a strong indicator that how you play the game is significantly influenced by your mood.

Having become quite addicted to killing other players in GTA V Online, I thought my initial impressions when I reviewed GTA V’s story mode last year were worth revisiting. Unlike my FIFA 17 addiction, which was an unfulfilling piss boiling tease, GTA V Online has the opposite effect. Not only does it offer therapeutic qualities, even in failure (your failure is often so preposterously daft that it’s amusing), it fills you with the warm glow of pure schadenfreude when you succeed. Here’s how:

Sadly the ferocious mania with which many often play GTA V Online underpins the desires, psyches, and events found in tragic news cycles. This is problematic, because I’d like to believe in the virtual sphere’s ability to prevent such explosions of actual violence. Clearly violent inclinations require an effective medium where it can be purged, preferably with convenience. There can be no more convenient medium than gaming in 2017, which can even be done on smartphones. I can only conclude that people either aren’t using gaming for its rightful purpose – escapism and relaxation – or that the medium’s options are still inadequate.

I choose to believe we’re not completely fucked and it’s a lack of choice. Picture the uproar, you’ve seen it before. But what’s better? Following through on liberalist proactivity, namely a game that allows you, in VR, at 4k, preferably, to re-enact the massacres at Sandy Hook or Dunblane, or wallowing in a deeply conservative, self-congratulatory reactiveness to such facilities? Where we’re left hoping that social stigmatisation and the vogue of vapid hand-wringing media condemnation will suppress the various forms of animosities that cause these events?

I reckon Rockstar agree with my analysis, their parodying of American gun culture is not only cutting but effective. Enter the Ammu-nation stores and you come face to face with a number stereotypical gun store owning nut phenotypes replete with defiant NRA fetishisations and commentaries: ‘I love the smell of gunmetal’, ‘bask in the radiance of my extensive collection’ (let’s face it, there’s a loutish materialistic pride in owning all the guns) and ‘you know what would stop all the killing in this place – every one of the sheep out there owning a piece’. Counterpointed by the context of GTA’s perpetual sarcasm, and concept where killing of other players and theft of their misappropriations is encouraged, it rams home the insanity of the NRA’s stance. As with real life, in GTA V Online, the more violence you encounter or create, the more likely you are to perish.

In the abstract it’s bizarre, misanthropic, snide, moronic and ultimately hypocritical to want to behave homicidally, even in the virtual sphere. But gosh, is it ever gratifying when it ruins someone else’s fun. Especially when your avatar is a pink haired girl carrying a pink sniper rifle with all the attachments unlocked. Misandry versus misogyny? It’s on, bitches.

After I’ve fucked up their shit and ruined their nefarious schemes a warm hedonistic tingle becomes a cascade when I picture the scunnered look on their faces, akin to puppy that gets drop kicked every morning. The symposium of anger it creates is equally amusing. Retribution? Fine by me, as I’ve unlocked all the game’s weapons and so it’ll usually end badly for them. Sadly the infantile rage GTA V Online often creates suppresses the imagination. The responses in the chat are tawdry, barely illiterate offerings lacking in ingenuity or originality; noob this, noob that, fuck you, or occasionally you encounter the kind of childish 4Chan pathos that anonymity allows as they revert to their racial, xenophobic, sexist and sectarian epithets of choice. But, to paraphrase Muhammad Ali, after they get owned their silence is golden. It’s a clear sign that they can’t think of a rebuttal or talk trash, and just how do you think they’re going to satiate that rage? Go out and actually kill someone? Nope, by trying to get even in the medium which it occurred.

I realise that I’m being overly-simplistic here, and that the motivations for violent acts can be deep rooted, highly complex and sudden, but trying to mitigate such events through applying common sense – say banning the sale of automatic weapons to the public and providing as many coping mechanisms for personal demons as possible – is better than doing nothing.

Killing in the name of gratification is an opiate all the masses should believe in, after all, it’s deep rooted conditioning. We’ve been doing it in countless wars and conflicts for thousands of years. Now, if only those who go on mass killing sprees could have the foresight and opportunity to purge their complexes online, and Trump and Kim Jong-un challenged each other to a one-on-one Deathmatch in GTA V Online, maybe, just maybe, a good deal more of us might come out of this mincer relatively unscathed.

Wichita Lineman Was A Song I Once Heard. 'Mediocre blogger and a piously boring and unfunny writer'. Enthusiastic purveyor of the KLF sheep.
View all posts by Wichita Lineman Was A Song I Once Heard →
This entry was posted in Odds & Ends and tagged 4Chan, a template for humanity’s survival, Catalonia, FIFA 17, Genocide, GTA V Online, It's getting cold so I want to kill Penguins and Polar Bears, Kim Jong-wrong'un, Misandry versus Misogyny, Myanmar, Noob is a crap insult, NRA phenotypes and fetishisations, one-on-one Deathmatch, Pink fluffy girl in a pink fluffy world, Re-enacting Sandy Hook or Dunblane, Rockstar, Tango Trump. Bookmark the permalink.