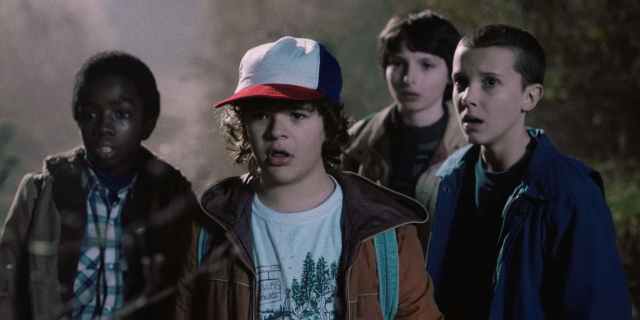 Everyone’s experienced that specific frustration – an embittered envy that occurs when someone else has thought of something that should’ve been obvious to you before the fact. Take any ubiquitous modern technology; say Smartphones, they’re so practical and indispensable to everyday life that it’s hard to imagine how we didn’t think of them before they existed, and if we did, why didn’t we act on it? The new show from Netflix, “Stranger Things”, and its concept, evokes a similar irritation within me. Splicing the thematic intent, eeriness and nerdy intrigue of the X-Files with The Goonies halcyon nostalgia makes complete sense now.

But here’s the thing – creating a TV show that’s a homage to many cult movies and TV shows of years gone by isn’t quite as straightforward as developing a lifestyle product. The moral stakes are higher and it’s harder to pull off. If you create a bad product, it gets panned, probably doesn’t sell, and everyone moves on. If you make a bad show, well, that’s different, it’ll incite some serious scorn for a start. Why? Anyone brought up in the eighties and nineties, when television assumed such dominance over popular culture and entertainment, will likely have a fandom, or several, which they’ve personalised and therefore feel protective towards. There’s a fine line between originality and plagiarism, the line becomes blurred further when dealing with cultural property. This you’ve gotta get right.

Getting it right means giving people the clichés integral to all fandoms. Fandoms allow projection onto another sphere, usually through a characteristic that reminds us of ourselves or someone else, positing a character or something we’re likely to like or dislike, and or universal scenarios that we’re liable to associate with. “Stranger Things” covers all of these bases as it consumes, and assumes, the many elements of successful TV shows between when it is set – 1983 – right up until now.

The show starts by centring on The Goonies angle – a group of four misfit twelve year old kids who hang out together by cycling around or playing a dorky board game, virtually everyone over the age of thirty did one or either at that age. Some come from stable nuclear homes, others not so much. Then one of the four, Will, goes missing. The other three, Michael, Lucas and Dustin, endeavour to find Will, disobeying all the adult voices in the process – the most relatable of tropes.

In the fallout, we’re introduced to a plethora of folks and subjects that help build the plot and become central to events – a mysterious government facility is located near to where Will goes missing, and it lies on the outskirts of a quaint Indiana town which mirrors the stock spectrum of American life. We have the broken down, heavy drinking and pill popping anti-hero lothario sheriff Jim Hopper, who still retains his powers of perception. Will’s older brother Jonathan, the loner loser student who listens to The Smiths, The Clash and Joy Division, and takes moody black and white photographs, which today would put him in the wheelhouse of geek hypster chic, probably has a thing for the latently compassionate prom queen in waiting Nancy, Michael’s older sister, who dates the richer kid jerk, Steve. Steve has perfect hairspray hair and adorns the trite preppy fashion sense of early eighties jock materialism. He looks like the other one from Weird Science, namely the one that wasn’t Anthony Michael Hall, only fully post-pubescent.

Eventually an angelic girl with telekinetic type powers appears too, and she’s on the run from an immaculately coifed enigmatic scientist who appears to be behind all the oddness, played by Matthew Modine. He incorporates Karl Lagerfeld’s dress sense with Roger Sterling’s smug self-assuredness sans the biting verbosity. Much like the early incarnation of the X-files cigarette smoking man, initially he appears little, but when he does, it’s with devious or questionable intent. He works as an exposition meter for the strange goings on, the more he appears and speaks the more that’s revealed, yet anything that is revealed is perfectly couched by his vague doublespeak and odd platitudes.

Finally, there’s Will’s mum, played by Winona Ryder. Here they’ve cleverly wielded her historical roles in film as the outcast, and by borrowing the angsty teenage typecast she’s been most associated with, in Beetlejuice, Edward Scissorhands and Heathers, and transposed it into neurotic early forties motherhood. She’s physically frail, becomes even more mentally fragile after Will’s disappearance, where her sanity is questioned and her exposure to the narrative’s oddities is initially disbelieved by Jonathan and sheriff Hopper, before, as with her other famous turns, she resiliently rebounds. She also rebounds from her dreadful wig – that it’s the most absurd thing about the whole show is a strong indicator of how enjoyable and engrossing it is.

Even the opening credits are related to something that went before, promoting a garish gothic font akin to The Evil Dead. The beautiful bass heavy electro music used during the intro reminds me of that lovely Monotonprodukt 07 reissue from a few years ago, while the score is reminiscent of Close Encounters of the Third Kind.

Okay, so while there’s no extra-terrestrial stuff going on in season one of “Stranger Things”, as the poster on Fox Mulder’s office wall read ‘I want to believe’. Life is pretty mundane for most us, as it was for many of the characters in “Stranger Things” before it all started happening. Those of us who consider ourselves to be liberal and rational minded won’t openly admit it, but we all know it’s far more enjoyable to believe in the possibility of the fantastical, whether it be alien experiments on citizens covertly conducted by the government, or some other audacious eleventh of September style conspiracy theory. We know they aren’t real, and that most of them simply can’t be. But it’s far more interesting to dwell on them than the reality, which isn’t. Ongoing civil wars, waterboarding terrorists, terrorism, the demonization of minorities and immigrants and dogmatic occupations of foreign countries are tawdry, both in their application and social implication, of how we’re supposed to react – either complacently supporting the dogma, or to be insufferably outraged in a manner that’s piously tiresome. While these events are scandalous, we’re subjected to their subsidiary binary debates continuously, and this makes us desperate for variety in our escapism.

The writers and directors of “Stranger Things”, the Bunker brothers, know that folk enjoy escaping into simple narrative structures that work, as they allow scope, where intrigue can be piqued and then satiated. They also know that the medium of television and the genre of science fiction, when used correctly, is its own fandom. It offers the audience the license to believe in anything they choose with no fear of reprisals or public judgements.

Watching this show made me want to deliberately think of a concept that’ll allow me (and others) to do this more often, which means I probably won’t be able to. Still, at least someone was able to do it quite well. The bastards.

Wichita Lineman Was A Song I Once Heard. 'Mediocre blogger and a piously boring and unfunny writer'. Enthusiastic purveyor of the KLF sheep.
View all posts by Wichita Lineman Was A Song I Once Heard →
This entry was posted in TV and tagged Beetlejuice, Close Encounters of the Third Kind, Edward Scissorhands, Escapism, Fandoms, Fox Mulder, Heathers, Homages, I want to believe, Joy Division, Matthew Modine, Monotonprodukt 07, Netflix, Nostalgia, Stranger Things, The Bunker brothers are bastards for thinking of this first, The Clash, The Evil Dead, The Goonies, The Smiths, TV, Winona Ryder's terrible wig, X-Files. Bookmark the permalink.