So, just what made Muhammad Ali ‘The Greatest’? 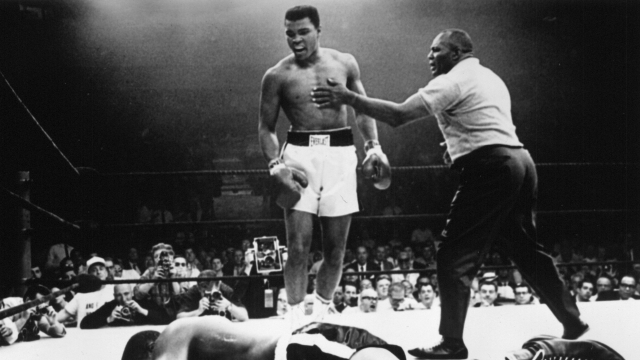 People die every day; if you’re jammy you get old before this happens. That makes Muhammad Ali one of the fortunate.

There’s been enough gushing opinion on the internet about him, so I won’t add to it, nor personalise it in a vomit inducing sycophantic manner, or attempt some conclusive take on what he meant ‘to the culture’. I accept that by writing about this it can easily be construed as such, but trust me, that isn’t my intention here.

I’ve always been fascinated that ‘The Greatest’ tag stuck so firmly, and that it became far more potent and transformative than any alias. Others have been described as or described themselves as such before and since in other sporting and artistic spheres but with Ali it became his fixed metonym. He said it, and with enough belief that enough believed it as true. The proof? When you said it, ‘The Greatest’, everyone knew who you were referring to. It didn’t matter how old you were, where you were from, or, like me, you weren’t that interested in boxing, its implied meaning and understanding had the ability to unite on a basic, universal level.

Because I’m not versed in the sport’s knowledge I’m not going to be absolute, but I strongly suspect that Ali is viewed as he is not solely for his ability as a boxer, though unquestionably considerable, but mainly for his personality, showmanship and resolve. In his youth he was a captivating, provocative and exotic blend of confidence, charisma, dogged self-belief, eloquence and sheer contradiction, but most of all principle, that was totally ill at ease with the racial stereotypes and cultural context in which it existed.

Not even the brazen, lamentable and predictable commodification and deification of him in later life for commercial greed (be it terrible fictionalised documentary movies, or grasping cunts looking to make money through just being associated to him), nor his aborted late career bouts (which proved that, like us, he was susceptible to hubris and pride) change the perception. Nor did the striking sight of his mortality in lieu of his reputation and legend – visibly frail, and cowed by Parkinson’s disease lighting the Olympic torch in Atlanta in 96, or egregiously, unforgivably and distastefully (as his attendance was cynically driven by the twat that is Seb Coe) his token cameo at the legacy-less London games four years ago.

But let’s not be too negative about the cynicism of others as Ali wasn’t as a figure or person, because wait a minute, there are Youtube videos which shows us his personality in abundance. Plus the selectivity of the medium affords folk the opportunity to consume him in any bespoke way they choose. Sadly, I’ve watched some truly cringeworthy ones where he’s obsessively fawned over, to the point that it becomes very weird and uncomfortable, but I suspect many will elide them, instead immersing themselves in the more restrained yet still unblemished portraits of the legend, like this moment, which is pretty neat. Undoubtedly this process will permanently solidify his reputation now that we have the opportunity to immortalise the mortal.

The one above is my favourite so far. It’s Muhammad Ali with two other great boxers who were his most formidable rivals – George Foreman and Joe Frazier. The other two are just normal blokes, albeit strong, tall and good at ducking, weaving and swinging their arms with accuracy and force, just talking about their careers as they would with anyone anywhere. Ali, albeit already visibly diminished by too much punishment, on the other hand, is in his element, and still demands all of your focus. It was yet another stage where he got to be himself. Here he manages to be gregarious even whilst being relatively quiet and understated, and comedic by employing the Karl Pilkington deadpan routine to deliver uncharacteristic modesty.

It begs the question, did his talent make him this way, or was being himself the innate gift that elevated him in his chosen profession? I know which way I lean, but it doesn’t matter. The root of his cultural iconification is really our introspective intrigue. I think most folk wished they were like him or could just experience what it’s like to be truly admired for being sui generis, so watching someone like him receive the praise and adulation is the closest they’ll ever get. But whatever, as a spectacle watching ‘The Greatest’ being great at what made him great is totally justified.

Wichita Lineman Was A Song I Once Heard. 'Mediocre blogger and a piously boring and unfunny writer'. Enthusiastic purveyor of the KLF sheep.
View all posts by Wichita Lineman Was A Song I Once Heard →
This entry was posted in Sports and tagged Atlanta 96, Cassius Clay, George Foreman, Hated exercise - just like Karl Pilkington, Joe Frazier, Live the rest of your life like a champion, London 2012, Muhammad Ali, People die every day, Sebastian Coe is twatcunt, The Greatest, To be sui generis, YouTube video binge. Bookmark the permalink.