What do the Charlie Hebdo killers and Ched Evans hounders have in common? Intolerance, and stupidity. 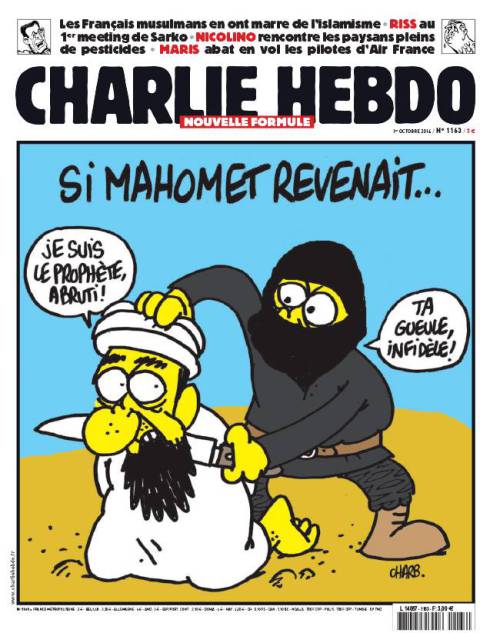 We live in interesting times, and this last week’s events have only served to reaffirm two central truths, namely that same people, too many people – okay me too – are now taking themselves and their beliefs too seriously, and as such, individually, and culturally, we’re becoming more intolerant.

In such a climate the killings of a French satirical magazine’s staff, and the reaction to it, was the perfect emblem, and indeed test, of this decay of cyclical futility. A test passed, and passed well. We had a publication, which through necessity cannot take the subjects it mocks seriously (and quite right to), become subject to an atrocity, committed by a few poor souls outraged at the contempt it showed towards the ideology they’ve decided should surround their sacrosanct faith. In reaction, these murders were cheaply branded with the banal rhetoric that accompanies outrage and condemnation, and the acts validated, as they were ascribed to a lazy and stereotypical contextual narrative that it, and other acts alike, should not receive.

Of course, the killers, in complete hypocrisy, knew that killing a few cartoonists won’t stop Islam, or rather the extreme and minority version of it, from being mocked and questioned. Case in point, by shooting the cartoonists, the murderers were, in effect, emboldening and reaffirming the publication’s right to mock them, and, well, anything really. They could’ve tried to challenge that right through legal procedure, but they would’ve lost, and as they’ve put their beliefs on a pedestal, their last resort was to commit this crime as a response.

This brings us to the crux of things. These days, maintaining beliefs in private and or without action is perceived to render them largely meaningless and powerless. Let’s call that a cross cultural consensus…thinking…which includes me. Killing the cartoonists was their only potent way of letting us know that only what they believe is acceptable, and it also aimed to justify and reaffirm their individual importance within the context of a movement, as all killings committed in the name of a cause, or something or someone, always are. To go to such extremes, to justify that what you believe is that important, you have to be smug, contemptuous, pious, arrogant and above all a complete bore. Like I’m being, right now, but then my manifestation of this is writing this piece and putting it on a blog that nobody reads.

And yet one failure invariably leads to another. The attack should’ve been seen by the political and media entities of mainstream culture for what it was; a cynical, self-gratifying act determined to encourage more derision, more separatism, more extremism, and yes, more intolerance. Sadly we got the most stupid, reductive and disingenuous of intolerances, presented as a feeble form of tolerance, a march of world leaders armed with the generic and blatantly untrue justifications, that the terrorists must be disaffected, disillusioned or impoverished, or something. It’s an attempt to validate their radicalisation as cogent, when of course it simply isn’t, and this cowed response, the tip-toeing around forms of extremism, invariably feeds opposing extremist beliefs. Freedom of speech and belief is a necessity, but stupidity clearly is not. Now remember, these lads decided to protect Islam’s name by killing some cartoonists. As far as ideas go, it’s laughable. Is it not possible to separate the stupidity of their idea, and what caused it, from their grotesque actions?

None of this nonsense is a surprise though, as “Terrorism”, or what it’s come to mean in the mainstream lexicon, is a lie. It’s branding, same as Pepsi, Haribo, McDonalds, or Diabetes, are brands. The people who blow up abortion clinics aren’t branded terrorists, they’re ‘Pro-life nutters’, yet in the literal sense, their actions fall under the Terrorism umbrella. Even better, take the example of whitey white boy Anders Breivik, who killed (mostly) white people for cavorting with or just not being bothered by others who weren’t. He was called a fascist, or nutcase, but not a terrorist. What this myopia confirms is that Terrorism is a euphemism for crimes committed by mostly brown skinned blokes against white folks on behalf of Islam. It’s branded instead of dissected, and as such it’s used by idiots to malign Muslims. In the wake of an attack, this branding is wielded, providing the perfect cloak to justify the machinations of authoritarianism. The dullards who commit these crimes deserve to be denounced, and that’s the obvious, easy and above all fair reaction, but the branding and labelling only helps us to pontificate about how seriously we take our own opinions, and that only tends to reaffirm how we see things. Branding serves a dual purpose of fomenting views that elide nuance, and helps to avoid asking pertinent questions; why does Islam have a propensity to attract such extremism? Why does it never seem to be mentioned that most of the victims of terrorism are Muslims? When faced with the choice we only tend to ask such questions when it suits our purview, and or the solution seems simple.

Which brings us to a bloke named Ched Evans. Yeah, aye, Ched Evans, who is, in case you didn’t know, a footballer, or rather was one. He was convicted of rape a few years ago, there’s that too. Recently he was released from prison and has made an attempt to continue with his career. Last week reports surfaced that Oldham Athletic, of the third division (in old money), were looking to sign him.

This was a big deal, but well, why? I’d imagine it’s quite a common thing for a number of convicted rapists and sex offenders (there you go with that there branding again, fella) to attempt to find work after they get released from prison. Some of them probably succeed, and within the culture this is widely accepted as due, acceptable, process. So why was Ched Evans different?

There are various strands to this argument, and all of them are completely bogus and utterly self-serving, and as such intolerant and mind numbingly fucking stupid.

Just like the motivations of the Charlie Hebdo killers, there’s a rank hypocrisy lurking behind those who, through protesting, mainly on social media, attempted to prevent Ched Evans from signing with Oldham Athletic. Take Lee Hughes, who killed somebody while doing the Jackson Pollock drink heavily and drive badly thing. After being released from prison he came back to play professional football. Yes, I’d imagine there were people who didn’t like that fact at the time, but now, only a few years later, there are a raft of enraged folk, many of whom have and or had little interest in football or Ched Evans, decrying him for attempting to do the same thing, and while rape is a lamentable crime, can it be considered worse than killing someone? Or is it just a case of Evans’ crime having intent and being sordid and lurid?

But should that matter now? I made this point on Twitter, albeit it more succinctly and therefore crudely, what good does it do now to hound Evans on social media, or to even take it further with petitions? Just what are the motivations behind it? Where is the arbitrary point where you decide that he’s been punished enough? Does he need to show contrition, more contrition, and if so, what kind? Or is it too late? Is it because he insisted that he was innocent? Is he allowed to work? If he shouldn’t be allowed to play professional football, what job is he allowed to have? And when is he allowed to have it? Is he allowed to say, work on the bins, where he’d be out of public sight and out of mind? But working on the bins is a job, a lesser one, and perhaps that’s the point, or is it? Would bin collecting companies or the council be condoning rape by hiring Ched Evans, like Oldham Athletic were foolishly accused of?

Rapes, murders and sexual assaults are committed by many people for different reasons and most of them not by footballers, yet those who commit the same crimes tend to receive far less attention and as such less scorn upon release. What good does it do to have this fella sitting on the dole, when essentially it’s just so we can feel better about ourselves that justice, or whatever notional idea we have of what it should be, has been meted out, when it’s only to a public figure? And does preventing him from joining Oldham even begin to make up for his crime?

So what is justice here? Personally, given the crime, I think he should still be in prison. That’s my opinion, but he’s served his sentence and he’s been released, so that’s it.

But let’s try to be practical about the why. Football, of course, isn’t a regular profession. It’s proliferated and sold as a product. Its popularity means it to holds a significant influence and a place within the culture, and so it and its subjects attract more attention. This makes it a faithful avatar for wider attitudes and conventions in society, and that means it reflects who we are and the society we’re part of, good and bad.

People know this, so when they see a football club signing a convicted rapist, or trying to, they’re confronted by the systemic unfairness and flaws of the social contract they tend to ignore. It makes them uncomfortable that it is acceptable, or that it could be. Yet invariably the focus becomes the individual, and why not, just like denouncing Terrorism and Terrorists, it’s the easiest and laziest way of distinguishing ourselves from them. In the abstract it’s unfair that Evans should continue with his life, and profit, perhaps even find a form redemption where he’s largely ignored, when there’s a good chance he’s ruined someone’s life or damaged their psyche. And yes it’s distasteful that businesses, particularly football clubs, and sport in general, tends to be forgiving, particularly if the talent warrants it. It may be the case that Ched Evans’ talent doesn’t, but that Oldham strongly considered signing Ched Evans, despite him being convicted of rape and the social stigma that comes with that, suggests otherwise, and it suggests to me that they won’t be the last club to consider it. So, ask yourselves, is Ched Evans really the problem here?

I suspect that many who heard that Ched Evans was signing for Oldham might not have liked that fact, as they knew showing their intolerance towards his right to move on would do little to change the attitudes that causes the crime he committed. They understood that while the legal system often isn’t as fair as it should be, that isn’t Ched Evans’s fault. Instead it was the palpably insecure mouth-frothing and loud minority of the stupid and intolerant who were heard, the motivation behind it reminding me of those odd folk who stand outside courtrooms waiting to scream obscenities at paedophiles as they’re driven away in a secure van to prison. The message being – we’re not like you, and we need others to see that.

Whatever Evans does or doesn’t do, or achieve, won’t ever erase the fact that he raped someone, and any attempts to prevent him from playing football is unlikely to change his belief that he’s innocent of the crime itself, as they’re two different things. Believing that they’re connected or should be is just as silly as those dickheads believing that killing cartoonists was an effective way of protecting their faith from ridicule.

2 Responses to What do the Charlie Hebdo killers and Ched Evans hounders have in common? Intolerance, and stupidity.